All photos on Far North Queensland Skies are copyrighted to me, or the photographer of that photo. All photos that are downloaded from Far North Queensland Skies are strictly intended for personal use only. Anyone, including the media, who would like to use any of the photos on the Blog, for any purpose other than personal use, must contact me in writing to obtain permission to use the photo(s). Any photo not taken by me, that was obtained from another photographer or another source, that appears on this Blog, will be duly acknowledged as such.

The major activity for November was the U.S Presidential visit to Port Douglas. With the stopover of President Clinton on the 22nd following his visit to Canberra, the Presidential circus arrived in FNQ. Earlier in the week prior there was numerous flights into Cairns of C-141 Starlifters and C-5 Galaxy’s of AMC plus a Special Air Mission (SAM) VC-137 (27000) bringing in secret service equipment, secure mobile communication suites, vehicles and a Presidential VH-60N chopper.

Both VC-25’s of SAM were in use (29000 as AF1) and 28000. SAM Gulfstream C-20B (60403) acted as the ‘hot ship’ used by the Secret Service, plus as an emergency ‘egress’ aircraft for POTUS, it parks remote and remains fully fuelled with APU running alternating with ground power. 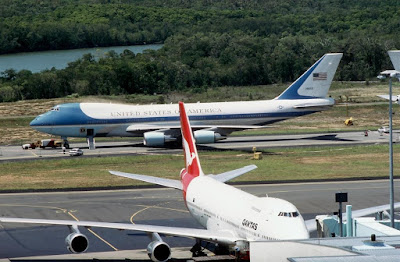 The White House press corps travelled on AF1 while media not sponsored for travel on the former used a Northwest DC-10-30 (N228NW) for its transport. 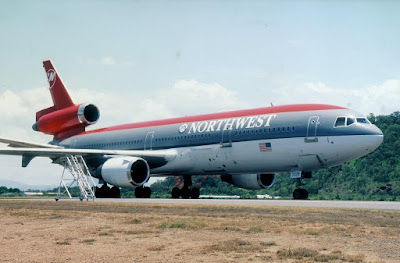 A memorable week at the Cairns Airport.

Welcome to the FNQ Skies blog.

Pictures and reports are welcome.